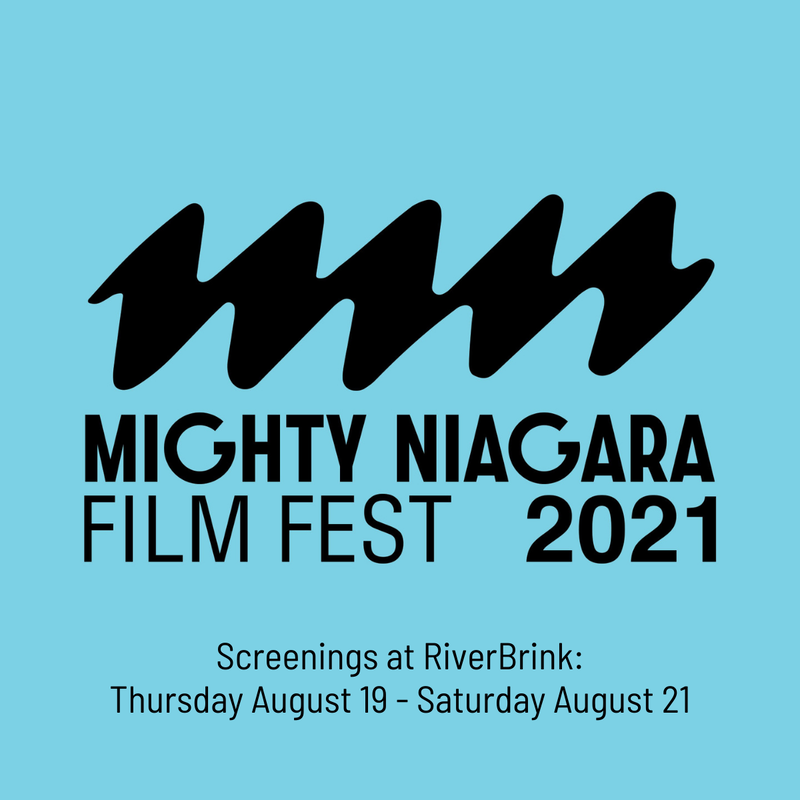 The Mighty Niagara Film Fest launches this summer! Produced and organized by the Niagara Artists Centre, the festival is also supported by many community partners, including founding sponsor Stratus Vineyards. The Niagara Artists Centre has dug out some of the absolute best films made by Niagara filmmakers. What we’re creating is a film festival that Niagara can truly call its own. It’s built for us, and it’s built to last. Screenings at RiverBrink will take place:
Thursday August 19 - Saturday August 21.
Doors open at 8pm. Screening starts at sunset (approx 9:15pm)
​
Accessibility note: The venue is fully accessible at street level. Caution with potentially uneven lawn surface.
Please click here for more details on tickets and pricing

The Falls
Canada, 1991. Directed by Kevin McMahon. 89 min. NR
This ambitious and skilfully realized documentary, a landmark in Canadian documentary films, sets out to capture the awesome beauty of Niagara Falls, the crass industries that have risen up around the Falls, and the odd obsessions of the people drawn to them. Director Kevin McMahon, a Niagara Falls native and former journalist at the St. Catharines Standard, investigates the high eccentricity and profound tragedy that inhabit this border town and tourist trap which is often referred to as the Canadian capital of kitsch. One man casually recalls the fools he has seen tumble over the Falls to their deaths, including his own brother. A Love Canal mother speaks with cold rage about the birth defects visited upon the children born near that chemical cesspool, while ecology experts show us birds and fish that surpass in their mutated hideousness anything in the town’s Freaks of Nature Museum. The film’s music was composed by NAC member Kurt Swinghammer.

Film Introduction by Barry Grant.
Trailer
​
Gordon Reeve's Niagara Strait
2020. Directed by Justus Duntsch. 27 min.
This short film documents the production and installation of Gordon Reeve's site-specific sculpture "Niagara Strait". Juxtaposing images of the work's journey to realization and interviews with the artist, various layers of intent and concept are brought to the surface. Reeve offers the viewer insights to the historical and site-specific context of the work and its references to the Niagara Glen, Niagara River, and the indigenous people who are the original stewards of this land.

Produced entirely in the Niagara Region by Niagara resident and local artist, Justus Duntsch. All of the content refers directly back to this region as the film follows the production and installation of what may be argued to be Niagara's first major permanent site specific sculpture. The film was commissioned by Niagara's own RiverBrink Art Museum and features original made-in-Niagara music. *The sculpture was commissioned and is owned by Niagara Parks Commission.

CUT
Canada, 2021. Directed by Mike Hoolboom. 68 min. PG
Based on Hito Steyerl’s bracing 2009 essay of the same name, Cut looks at how cinema and the assembly line both cut the body in new ways, organizing newly urban work forces. A dreamy collage essay made of scraps and fragments, with asides from Susan Sontag on Disney fascism, and Paul B. Preciado on the cost of living in a body.

Mike Hoolboom began making movies in 1980. Making as practice, a daily application. Ongoing remixology. Since 2000 there has been a steady drip of found footage bio docs. The animating question of community: how can I help you? Interviews with media artists for 3 decades. Monographs and books, written, edited, co-edited. Local ecologies. Volunteerism. Opening the door.
More Info

fixed / fleeting
Canada, 2016. Directed by Julianna D’Intino. 7 min. NR
Filmmaker Julianna D’Intino captures her grandmother's experience immigrating to Canada through Ellis Island in the 1940s, contrasted with the artist’s inaugural encounter of the July 4th Holiday while living in America.

Julianna D'Intino is an Italian-Canadian Artist and Filmmaker, born and raised in Niagara. She makes work about finding and creating home, about longing and belonging and finding or making a place in the world. She holds a Bachelor of Fine Arts from Parsons School of Design.

Michael Snow, Timed Images
Canada, 2021. Directed by Tracy Van Oosten and Lesley Bell. 14:15 min. NR
Timed Images was one of two works of public art commissioned by Brock University in 1972. The University was expanding. In collaboration with architect Raymond Moriyama, artist Michael Snow created a multi-media installation, designed to be embedded in the new architecture.

Timed Images was a series of components arranged along a central hallway. Using emerging portable video technology, in a closed circuit, it invited people to interact and see themselves framed by the new building. The Photo Mural was a sweeping mosaic of photographs taken by Snow to portray the building itself. Only fragments of Timed Images exist today in their original location. The mural is intact and is a documentation of the architectural setting in 1972.

This short video presents research in the form of archival documents from Snow's own papers, letters between him and the architectural firm, and photos then and now. Artistic animations draw out his creative process and aspects of the installation.

This experimental film follows two spirits in red, who guide us through the seemingly impossible suffering and joy of the fertility experience. An elemental narrative unfolds, marrying the pregnant female body with the fertile ground. Dancing between documentary footage and poetic performance, the Broadbent Sisters give life to the untold story of miscarriage and birth.

The Broadbent Sisters, Joy and Rose Broadbent, grew up in St.Catharines and are now based in Toronto. The lush dreamy nature and landscapes of the Niagara region helped form their connection to elemental imagery in their current films and artwork.

Call Me Human/Je m'appelle Humain
Canada, 2020. Directed by Kim O'Bomsawin. 78 min. G
Sauvage”, says Joséphine Bacon, “means to be wholly free”. When elders leave us, a link to the past vanishes along with them. Innu writer Joséphine Bacon exemplifies a generation that is bearing witness to a time that will soon have passed away. With charm and diplomacy, she leads a charge against the loss of a language, a culture, and its traditions. On the trail of Papakassik, the master of the caribou, Call Me Human proposes a foray into a people’s multimillennial history, in company with a woman of great spirit who has devoted her life to passing on her knowledge and that of her ancestors. In her language, Innu means “human”. Presented in French language with English subtitles.
Trailer

Layla Black is Mohawk Turtle Clan from the Six Nations of the Grand River. She shares her family’s journey to reclamation through their eternal connection to the water and the discovery of traditional teachings.